The initial step on every journey of addiction recovery is admission to a medically assisted detoxification center. Those who have been abusing drugs or alcohol for any period of time almost always undergo some degree of withdrawal upon abrupt cessation of use. More often than not, the symptoms of withdrawal will lead a person back to substance use before the detoxification process is over. This is part of the reason why entering into an inpatient detox program is so important. At Immersion Recovery Center we provide a comprehensive detox program; one that focuses on more than a safe, pain-free drug and alcohol withdrawal. In addition to providing around the clock medical care, we actively prepare our clients for the next appropriate stage of their personal recovery journeys. During Opana detox, we conduct an individualized, in-depth evaluation, which helps us determine the length of our clients stay, what kind of medical intervention is necessary, and the next step for each client once they become physically stabilized.

If you or someone you love has been suffering from an Opana use disorder, detox is an important initial step, and we are available to help. At Immersion Recovery Center we effectively treat the physical and psychological symptoms associated with Opana withdrawal, making the entire detox process as comfortable as possible from start to finish. We utilize a combination of evidence-based medications, therapeutic practices and holistic treatment methods to provide the most integrated and effective care available. To learn more about our program of Opana detox or to learn more about our multi-staged addiction treatment program as a whole, contact us today.

Opana is a brand name of the opioid medication oxymorphone, which is most commonly used for the treatment of moderate or severe pain. The National Cancer Institute states, “ It is also used as a sedative before surgery, to help with anesthesia during surgery, during labor, and to treat anxiety caused by some medical conditions. It is made from morphine and binds to opioid receptors in the central nervous system. Opana is a type of opioid and a type of analgesic agent. Also called Numorphan and oxymorphone hydrochloride.”

This specific type of pain medication was first developed in 2006, and was approved as a long-acting opioid used to treat short-term, around the clock pain. In most cases, this medication is only prescribed to be taken for several days consecutively, seeing as it has a high potential for abuse. Even individuals who take this medication exactly as prescribed are liable to develop a physical dependence if they take it for longer than two weeks at a time.

If you or someone close to you has been suffering from an Opana use disorder, there is help available, and recovery is possible. At Immersion Recovery Center we have developed a multi-staged program of Opana addiction recovery that begins with a short stay in an inpatient detox center. Contact us today to learn more.

Like the majority of opioid painkillers, Opana can be addictive and does have a high potential for misuse. Because the risks of Opana often outweigh the benefits, it is generally only utilized when other opioid painkillers have failed to provide relief.

The U.S. Food and Drug Administration states, “The product, currently marketed by Endo Pharmaceuticals, is a reformulation of the original product, designed with physicochemical properties intended to make the drug resistant to physical and chemical manipulation for abuse by snorting and injecting. While the reformulation was approved in 2011, the FDA determined that the drug did not meet the agency’s standards for being considered abuse-deterrent and therefore declined Endo’s request to include a description of abuse-deterrent properties in product labeling.”

In 2017, the FDA actually pulled the medication from the pharmaceutical market because of the risks involved. The Drug Enforcement Administration states, “The American Association of Poison Control Centers (AAPCC) reported 387 total oxymorphone exposures, 164 single exposures, and zero deaths in 2017, a decrease from 508 total case exposures (single exposures of 220) and two deaths in 2016.” Since these numbers were reported rates of Opana misuse have continued to rise. Despite the fact that the medication is no longer easily accessible, it is still being produced illegally and misused at exceedingly high rates.

Our Drug & Alcohol detoxification experience is second to none.

If you believe you or someone you love has been suffering from a diagnosable opioid use disorder, there are several signs and symptoms to keep an eye out for. The Diagnostic and Statistical Manual of Mental Disorders, Fifth Edition (DSM-V) outlines a list of diagnostic criteria used to identify the presence of an Opana use disorder. If you answer “yes” to two or more of the following questions, seeking professional help from a medical detox center is likely a good idea.

The symptoms associated with Opana detox can be extremely uncomfortable, but symptoms of opioid withdrawal rarely lead to life-threatening complications. Most people who undergo Opana withdrawal liken the symptoms to those of a particularly bad flu or cold. If no physical or psychological complications develop, symptoms can typically be treated with a combination of over-the-counter medication and bed rest. However, Opana withdrawal will affect everyone differently, which is why entering into an individualized detox program is so important. 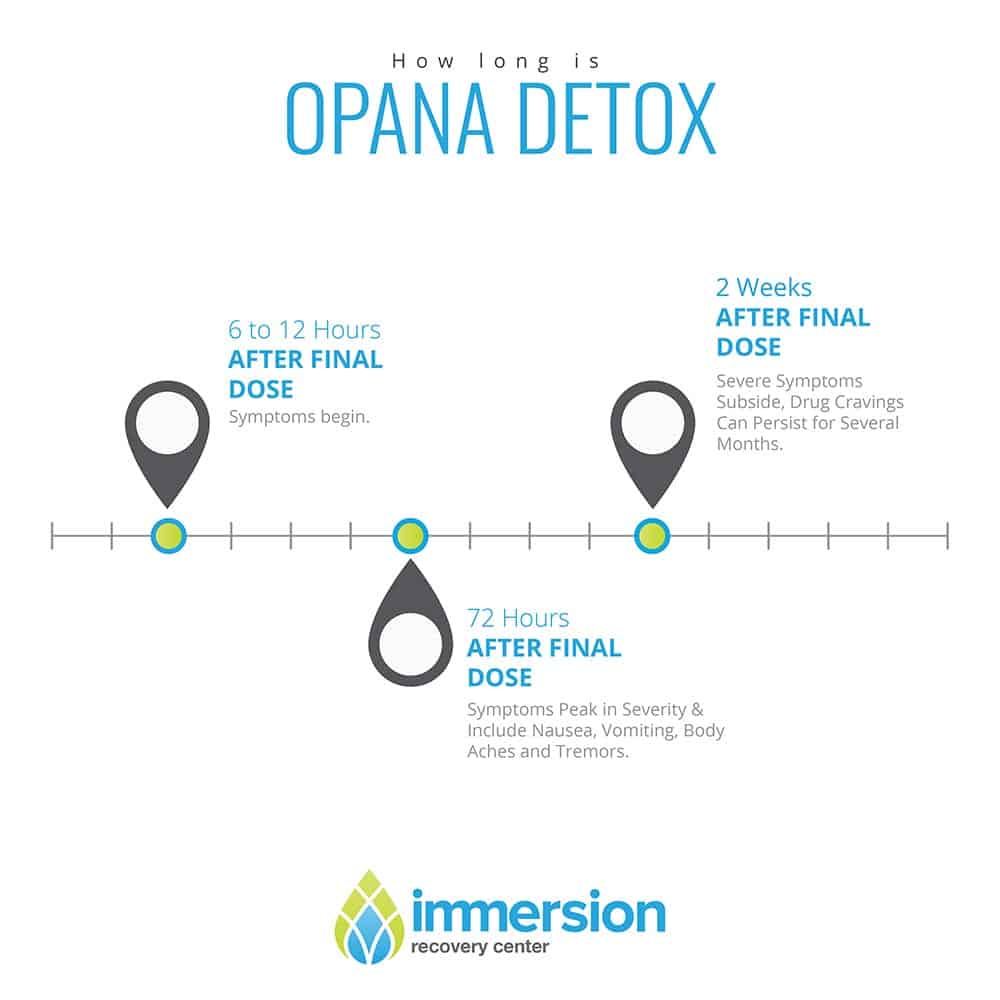 The Physical Symptoms of Opana Withdrawal

The most common physical symptoms associated with Opana withdrawal include:

The Psychological Symptoms of Opana Withdrawal

The most common psychological symptoms associated with Opana withdrawal include:

In most cases, the symptoms associated with Opana withdrawal begin two or four days after the final dose and resolve completely within one or two weeks. The duration of withdrawal might be longer depending on whether or not Opana was being combined with another chemical substance like alcohol, what dose of Opana the person was taking on a daily basis, and the presence of any underlying, pre-existing conditions. In most cases, drug cravings linger long after the acute withdrawal symptoms subside. If an Opana use disorder was particularly severe and cravings interfere with treatment retention, medication assisted treatment might be necessary.

Most people who attempt to quit on their own and detox in a home setting find themselves returning to use before the withdrawal process has concluded. This is partially because the physical symptoms of Opana withdrawal can be so harshly uncomfortable, and partially because opioid cravings can be so intense and overwhelming. At Immersion Recovery Center we effectively treat the physical symptoms of opioid withdrawal while reducing drug cravings through a combination of MAT and behavioral therapy. While a client is in detox, the treatment team develops a personalized aftercare plan, adequately preparing them to take the next appropriate step on their individualized recovery journey. No matter how severe an Opana use disorder has become, medical detox always comes as a recommended first step.

The most effective treatment options for Opana withdrawal depend on each unique case. While in medical detox, vitals are checked regularly ensuring no health-related complications are developing. A medical professional checks blood pressure, heart rate, temperature and respiration at least twice a day. If any vitals are irregular they will be addressed accordingly. Otherwise, a combination of over-the-counter medications and non-narcotic sleep aids is used to treat physical discomfort and sleeplessness, and more intensive measures will only be taken if physical or psychological symptoms are particularly severe.

The medications most commonly used for the treatment of Opana withdrawal include:

The questions we ask during the initial assessment help our clinical and medical team determine which detox methods are the most appropriate for each unique case. Next, we focus our attention on physical stabilization. Clients are able to relax in their private or semi-private bedrooms, and they have the opportunity to participate in group workshops and behavioral therapy sessions if they are feeling up to doing so. The physical and psychological symptoms of Opana withdrawal are treated as soon as they develop, seeing as our team of licensed medical professionals are available 24-hours a day. Our main priority is making the Opana detox process as comfortable as possible. Once physical stabilization has been achieved, clients make a smooth transition into the next appropriate level of clinical care. In most cases, this means transitioning into a residential inpatient treatment center. At Immersion Recovery Center we offer a multi-staged program of recovery, which includes:

Long-term Opana addiction recovery is possible. With an individualized and effective treatment program in place, even the most severe cases of addiction can be overcome. Contact us today to learn more or to get started with our simple and straightforward admissions process.