The initial step on every journey of addiction recovery is admission to a medically assisted detoxification center. Those who have been abusing drugs or alcohol for any period of time almost always undergo some degree of withdrawal upon abrupt cessation of use. More often than not, the symptoms of withdrawal will lead a person back to substance use before the detoxification process is over. This is part of the reason why entering into an inpatient detox program is so important. At Immersion Recovery Center we provide a comprehensive cocaine detox program; one that focuses on more than a safe, pain-free drug and alcohol withdrawal. In addition to providing around the clock medical care, we actively prepare our clients for the next appropriate stage of their personal recovery journeys. During detox, we conduct an individualized, in-depth evaluation, which helps us determine the length of our clients stay, what kind of medical intervention is necessary, and the next step for each client once they become physically stabilized.

If you or someone you love has been suffering from a cocaine use disorder, detox is an important initial step, and we are available to help. At Immersion Recovery Center we effectively treat the physical and psychological symptoms associated with cocaine withdrawal, making the entire detox process as comfortable as possible from start to finish. We utilize a combination of evidence-based medications, therapeutic practices and holistic treatment methods to provide the most integrated and effective care available. To learn more about our program of cocaine detox or to learn more about our multi-staged addiction treatment program as a whole, contact us today.

Cocaine is an illegal stimulant drug, one that is both widely used and highly addictive. In the early 1900s, cocaine was used for a variety of medical conditions and physical ailments, revered as a curative “miracle drug.” Before synthetic anesthetics were developed, doctors and surgeons used the chemical substance to help block and alleviate pain. It was soon discovered, however, that cocaine changed the physical chemistry of the brain, leading to physical and psychological dependence.

Cocaine is classified as a Schedule II chemical substance by the U.S. Drug Enforcement Administration, meaning it can be administered by a licensed professional for legitimate medical reasons, but it also has a high potential for abuse. Cocaine is often used recreationally, and is frequently combined with other chemical substances like alcohol or opioids. If you or someone close to you has been suffering from a cocaine use disorder of any severity, there is help available and recovery is possible. Contact Immersion Recovery Center today to learn more.

According to the National Institute on Drug Abuse and the 2020 National Survey on Drug Use and Health, an estimated 5.2 million people over the age of 12 have used cocaine at least one time within the past year. Of these people, around 1.3 million suffer from a diagnosable cocaine use disorder. Cocaine can be ingested in several different ways. NIDA states, “People snort cocaine powder through the nose, or they rub it into their gums. Others dissolve the powder and inject it into the bloodstream. Another popular method of use is to smoke cocaine that has been processed to make a rock crystal. The crystal is heated to produce vapors that are inhaled into the lungs. This form of cocaine is called Crack, which refers to the crackling sound of the rock as it’s heated. Some people also smoke Crack by sprinkling it on marijuana or tobacco, and smoke it like a cigarette. People who use cocaine often take it in binges—taking the drug repeatedly within a short time, at increasingly higher doses—to maintain their high.”

Excessive cocaine use is extremely dangerous and can lead to a host of serious issues, including the development of a cocaine use disorder and an increased risk of overdose. NIDA reports that in 2019, there were 15,883 cocaine overdose deaths in the U.S. If you or someone you love has been suffering from cocaine addiction and has had a difficult time quitting on their own, there is help available. At Immersion Recovery Center we treat people of all ages and walks of life who have been struggling with cocaine use disorders of any severity. We provide a multi-staged curriculum of care, allowing us to treat addiction on a physical, mental and emotional basis. Contact us today to learn more.

If you believe you or someone you love has been suffering from a diagnosable cocaine use disorder, there are several signs and symptoms to keep an eye out for. The Diagnostic and Statistical Manual of Mental Disorders, Fifth Edition (DSM-V) outlines a list of diagnostic criteria used to identify the presence of a cocaine use disorder. If you answer “yes” to two or more of the following questions, seeking professional help from a medical detox center is likely a good idea.

Cocaine withdrawal occurs when a person who has been using cocaine regularly stops use suddenly, or cuts back on the amount they are using significantly. Symptoms of withdrawal typically develop when a person still has a small amount of cocaine in their bloodstream. This is why checking into a medical detox center immediately following the final use is so important.

The Physical Symptoms of Cocaine Withdrawal

The most common physical symptoms of cocaine withdrawal are:

The Psychological Symptoms of Cocaine Withdrawal

The most common psychological symptoms of cocaine withdrawal are:

The length of the withdrawal process depends on several factors, including the duration and severity of the substance use disorder and the presence of any underlying mental or physical health concerns. In most cases, the symptoms of cocaine withdrawal begin very shortly after the final dose. Cocaine has a particularly short half-life, meaning it leaves the system quickly. 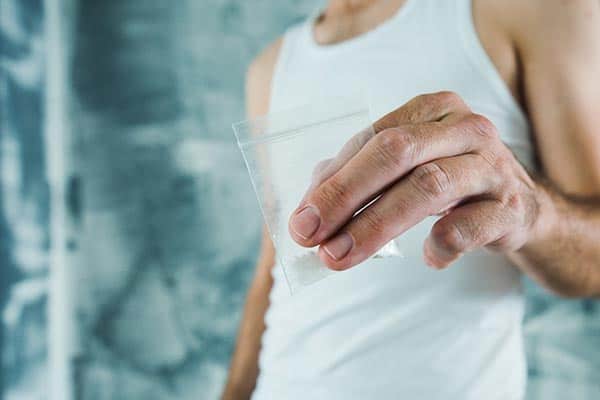 Cocaine withdrawal can be broken down into three distinct stages:

Even though the physical symptoms associated with cocaine withdrawal are rarely severe, the psychological symptoms should be closely monitored in order to prevent complications. There are numerous benefits which go hand-in-hand with inpatient detox, including:

What causes the symptoms associated with cocaine withdrawal? Is there any way to prevent these symptoms from developing? While there is no way to completely prevent drug withdrawal, there are ways to minimize associated symptoms, making the process as comfortable as possible. Cocaine withdrawal develops once use has stopped or once a binge comes to an end. When a person uses cocaine, the drug produces an intense sense of euphoria by releasing large amounts of dopamine and serotonin into the brain at once. When the drug starts to leave the system, the person experiences an intense crash. Dopamine and serotonin are depleted, and withdrawal symptoms only subside once the natural store of these vital neurotransmitters is replenished. Drug cravings are particularly intense during this crash, and they often lead to more use — which sets a vicious cycle in motion unless associated symptoms are adequately treated.

The best treatment options for cocaine withdrawal depend on the individual case. In most cases, mild and moderate symptoms can be treated with over-the-counter pain relievers and ample bed rest. Because one of the most common symptoms of cocaine withdrawal is increased appetite, clients are encouraged to listen to their bodies and take advantage of daily, chef-prepared meals. Individuals who use cocaine regularly for a prolonged period of time often become malnourished, and one of the best ways to facilitate healing is by replenishing vital nutrients. In severe cases of cocaine withdrawal, medication assisted treatment might become necessary.

There is currently no FDA-approved medication to treat the symptoms associated with cocaine withdrawal. However, if psychological symptoms are particularly severe, a short course of an antidepressant medication or anti-anxiety medication might be prescribed. A non-narcotic sleep aid might be prescribed to help alleviate sleeplessness or insomnia, and over-the-counter pain relievers like acetaminophen might be used to alleviate general feelings of physical discomfort. Contact us today to learn more.

The questions we ask during the initial assessment help our clinical and medical team determine which detox methods are the most appropriate for each unique case. Next, we focus our attention on physical stabilization. Clients are able to relax in their private or semi-private bedrooms, and they have the opportunity to participate in group workshops and behavioral therapy sessions if they are feeling up to doing so. The physical and psychological symptoms of cocaine withdrawal are treated as soon as they develop, seeing as our team of licensed medical professionals are available 24-hours a day. Our main priority is making the cocaine detox process as comfortable as possible. Once physical stabilization has been achieved, clients make a smooth transition into the next appropriate level of clinical care. In most cases, this means transitioning into a residential inpatient treatment center. At Immersion Recovery Center we offer a multi-staged program of recovery, which includes:

Long-term cocaine addiction recovery is possible. With an individualized and effective treatment program in place, even the most severe cases of cocaine addiction can be overcome. Contact us today to learn more or to get started with our simple and straightforward admissions process.